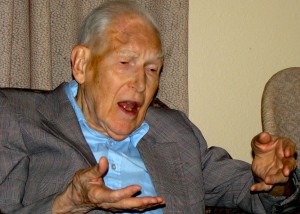 In explaining the five points of Calvinism in one of his greatest essays Dr J I Packer, now age 82, directs us to “one point Calvinism” — GOD SAVES SINNERS. Here are Packer’s main points (as told by Scott Thomas):

Packer said, “The very act of setting out Calvinistic soteriology [the doctrine of salvation] in the form of five distinct points (a number due, as we saw, merely to the fact that there were five Arminian points for the Synod of Dort to answer) tends to obscure the organic character of Calvinistic thought on this subject. For the five points, though separately stated, are inseparable. They hang together; you cannot reject one without rejecting them all, at least in the sense in which the Synod meant them. For to Calvinism there is really only one point to be made in the field of soteriology: the point that God saves sinners.

“God – the Triune Jehovah, Father, Son and Spirit; three Persons working together in sovereign wisdom, power and love to achieve the salvation of a chosen people, the Father electing, the Son fulfilling the Father’s will by redeeming, the Spirit executing the purpose of Father and Son by renewing.

“Saves – does everything, first to last, that is involved in bringing man from death in sin to life in glory: plans, achieves and communicates redemption, calls and keeps, justifies, sanctifies, glorifies.

“Sinners – men as God finds them, guilty, vile, helpless, powerless, unable to lift a finger to do God’s will or better their spiritual lot. God saves sinners – and the force of this confession may not be weakened by disrupting the unity of the work of the Trinity, or by dividing the achievement of salvation between God and man and making the decisive part man’s own, or by soft-pedalling the sinner’s inability so as to allow him to share the praise of his salvation with his Saviour. This is the one point of Calvinistic soteriology which the “five points” are concerned to establish and Arminianism in all its forms to deny: namely, that sinners do not save themselves in any sense at all, but that salvation, first and last, whole and entire, past, present and future, is of the Lord, to whom be glory for ever; amen.”

I once had lunch with Dr Packer (while in seminary) and have loved his writings for several decades. He writes clearly, and plainly from a biblical viewpoint. He is an author I heartily commend to you.
pdb

1 thought on “One Point Calvinism”