The esteemed theologian/pastor, Dr Derek Thomas is an Irishman living in the USA (recently moving from Jackson, MS to Greenville, SC). He has done some musing online about Christians, patriotism, and “rebellion” — at the Reformation21 blog. [I would, perhaps, want to qualify the term “rebellion” but that’s for another time]. He references some British history and some Scriptures, and raises a couple of interesting questions for us, as we celebrate the 4th of July shortly. 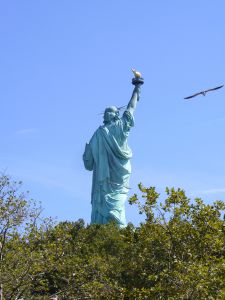 Having been silent for a while (a move to South Carolina, “God’s Country” as it is known in these parts, rendered me comatose for a season) I have been reflecting on the issue of rebellion against authority. I am, of course, a Celt and rebellion is genetic.

The reason for this diversion of though is partly due to a gift from the dear folks at Second Presbyterian Church, Greenville. Rick Phillips and Mel Duncan attended my installation at First Presbyterian Church, Columbia and gave me a book — a history of South Carolina — a fascinating tale of rich heritage and, yes, rebellion. Having endured the pain of acquiring a new South Carolina driver’s license — a process which the best part of an afternoon — I am a South Carolinian now. Of this later, but I mention it as the trigger that initiated the thought process which follows.

On July 2, 1644, Oliver Cromwell won a famous victory against Prince Rupert, the king’s son. The King, Charles 1, from his headquarters in Oxford, had ordered his son to go to the relief of the city of York against which Cromwell had begun to lay siege. The Prince’s army was routed. The King lost his army (an estimated 16,000 of Charles’s men were killed) and his Catholic wife (the cause of much of the trouble) fled to France.

Charles’ blunder was to offend the Scots (always a bad thing). Needing money to fund the war, he convened Parliament (which hadn’t met in a decade) — also a bad thing, since it was largely Puritan. It is doubtful that the Puritans were pro-Scot; more certain is the fact that they were anti-establishment, particularly since the establishment was prone to implement a particularly English form of church government and practice by force if necessary. Scotland, understandably, was defiant and declared itself Presbyterian. All this is well known, even if I summarize it here all too simply.

My point, on this anniversary weekend that commemorates an act of rebellion, is simply to ask, which side would you have been on? Cromwell himself was of no doubt that God was on his side. He wrote of the battle to a father whose son had been killed by Royalist cannon shot (they were forced to amputate his leg and he subsequently died), saying, “It had all the evidences of an absolute victory obtained by the Lord’s blessing upon the Godly Party…”

Rick has marvelously directed our thoughts to a biblical understanding of Patriotism (it is staggering to see how patriotism is an offensive idea in Britain and Europe generally today). But where does obedience to Romans 13:1-7 or 1 Peter 2:13 end? The apostle Peter was of no doubt that obedience to authority is not without limit: situations arise where Christian must follow a biblically informed conscience to obey God and not man (or country) (Acts 4:20, 5:29).

Are Christians justified in protesting at abortion clinics, for example? And if so, what form of protest is justifiable? Were Christians in the right to break the laws of racial separation in the southern states of America in the 1960s because they denied the fundamental equality of man before the law? The state may properly pass laws that may cause us some pain and discomfort, but if it forbids us to carry out what God requires, or encourage what God has forbidden, some form of civil disobedience, with acceptance of its penal consequences (showing that we recognize the God-given authority of civil government), is inescapable. This is, of course, decidedly unpatriotic.

Perhaps, on this holiday weekend, we should ask: am I willing to do the right thing — the Jesus thing, even if this means disobeying the prevailing authority?