Adrian Warnock reports & summarizes a message by Liam Goligher on Jonah 1, delivered in the UK around April 5. You know the story, but should be refreshed by these excerpts from Liam (via Adrian)…. 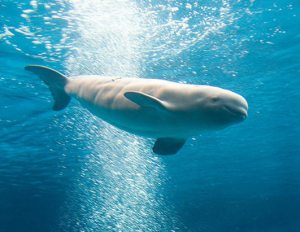 This is a very familiar story. Some people say its an allegory or parable. But parables are usually basic. The story itself has historical and geographical elements. Whoever wrote it seemed to want us to believe that this was a real event. It assumes historical correctness. Jesus likens himself to Jonah and spoke of the people of Ninevah as real people who really repented. Jesus took it seriously, so if we want to follow him so should we.

Salvation is of the Lord. God’s sovereingty is stressed here. God appointed the wind, the ship, the whale. There is a commission, and a recommission, and the sailors are saved, and the ninevites are saved. There are two prayers of Jonah – one greatful for his own salvation, one bitter when the foreigners were saved. Its beautifully structured, full of humour irony, etc. Jonah is a ridiculous figure. He is like a skulky, pouting, spotty teenager.

Its not about a big fish, as much as it is about a big God. Kindness of God to the biggest meanest city of the time. God has more trouble with his own people than with the others.

1. Jonah is running from God
God’s people were still rebelling. In 2 Kings 14, God saved Israel through Jonah. He understands the word of God and his message has been one of salvation. He came from Galilee, like Jesus and was the only prophet Jesus likened himself to. A prophet is a vehicle of God’s word to God’s people. Amos 3:7 says that God does nothing without revealing his secret to the prophets. The Christian life begins by listening to God. Faith comes from hearing, and hearing by the word of God. There is an urgency in the words “arise, Go!” This commission is more like the Great Commission than anything else in the Old Testament.

God judges the city of Ninevah as wicked. Ninevah becomes even more evil as we see in Naham. God knew it was going to become an even more evil place. Jeremiah tells us that God will relent of any judgement he announces if people repent. This prospect is what Jonah does not like about his task. So he runs away. The Word of God can detect microscopic fault lines in your soul. Some of us refuse to allow God speak to us through certain people, perhaps because they are not in our camp. There are some things that we will not let God speak to us about. There is an interior desire to rebel from the word of God. The word challenged his view of himself, and threatened how he saw himself. We can be proud and uncrucified on the inside even though on the outside we are moral. He runs from the presence of God. The nation of Israel represented God’s presence on earth.

2. Jonah runs into God
You cant ever get right away from him. You can run but you can’t hide. He probably felt circumstances had come together, and were “surely of God”. People say, I have “peace” about leaving my wife and children and going off with someone else. Jonah was so peaceful he slept. If you have a heart to disobey God, don’t be surprised if it seems for a while to work out for you to do so. But God was going to pursue him. He has a bit of freedom and autonomy but from verse four we read “but the Lord” and everything goes back out of God’s hands. Jonah doesn’t cry to God for mercy. He is asleep and indifferent. The same God who can calm a storm can also stir it up. God takes his choice of you so seriously that he will pursue you and do whatever it takes to save you. Jonah means a dove, is silly and senseless. God’s people were meant to be a light to the nations. The world looks at the church and wants to hear what it says, and the church is guiltily silent. We are weak and ineffectual, the church refuses to say the hard things to the culture. It never clearly articulates the gospel. We keep silent when we should speak. Church doesn’t want to stand out from the world.

Jonah doesn’t seem to be thinking about the sailors, but instead is self-absorbed. He does it without any real grace. But what he does saves them. The sailors turn to God.

Liam made Jonah, a familiar story seem fresh once more. He preached with a passion and vigour which gripped me and many who heard.